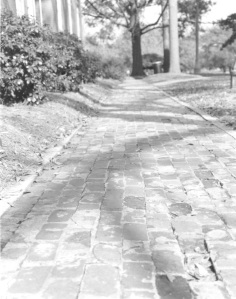 This is a photo that I took using a black and white film camera.  I was in a photography class where I developed the rolls of film and produced the photos using an enlarger and light sensitive photo paper.  This was one of my favorite paths at Mercer University until they recently took out all the bricks and paved a cement walkway.  Just goes to show that paths change, for better or worse.

More to come on my experiences at Mercer for my undergraduate work.